What Is the Actual Cost of a Fleet Accident? (with Infographic) 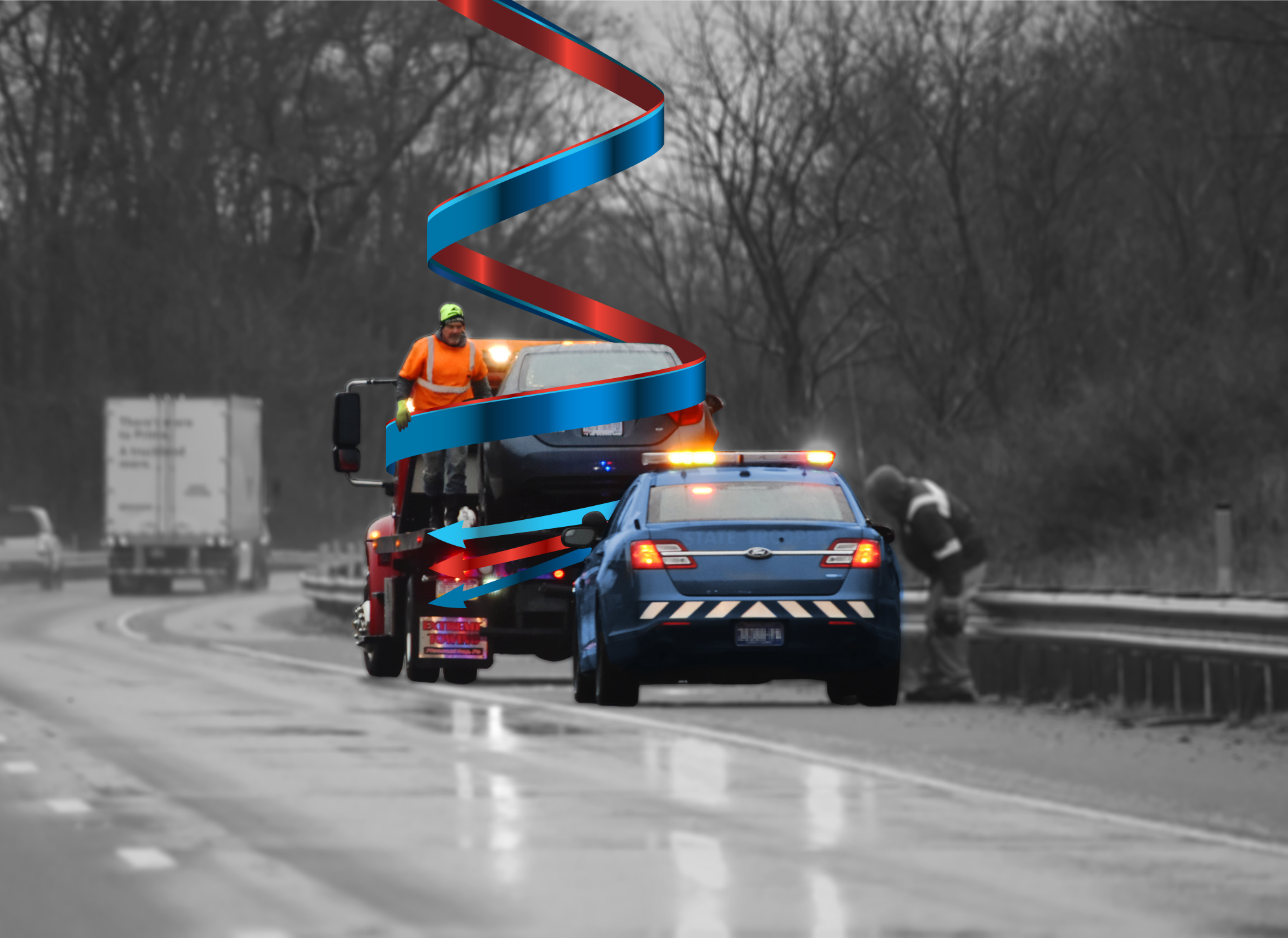 When it comes to the cost of fleet accidents, the obvious costs, like repairs and insurance excess, are very often just the tip of the iceberg.

Repair costs and insurance excess charges are easy to plan for. They’re relatively known values and you can factor them into your budget.

But, lurking beneath the surface, is an ocean of hidden expenses, waiting to trip up your budgets and planning.

Before we dive into the hidden costs of fleet accidents, first let’s try and break down what a fleet accident is likely to cost a business, and how much revenue they’ll need to generate to offset that cost.

Looking at some numbers from the Occupational Safety & Health Administration (OSHA), we can come up with a “best case” scenario of approximately $16,500 on damages and $57,500 on injury-related costs, which equates to just over $1.1M in revenue to offset that cost, when you factor in some very basic “below the line” costs.

“Is it easier to generate $1.1M in revenue, or be more proactive and pay more attention to fleet safety?”

And that hidden cost calculation above is conservative. It really does represent a “best case scenario” in terms of bottom-line impact. So, what kind of hidden fleet accident costs can your business end up having to shell out for? 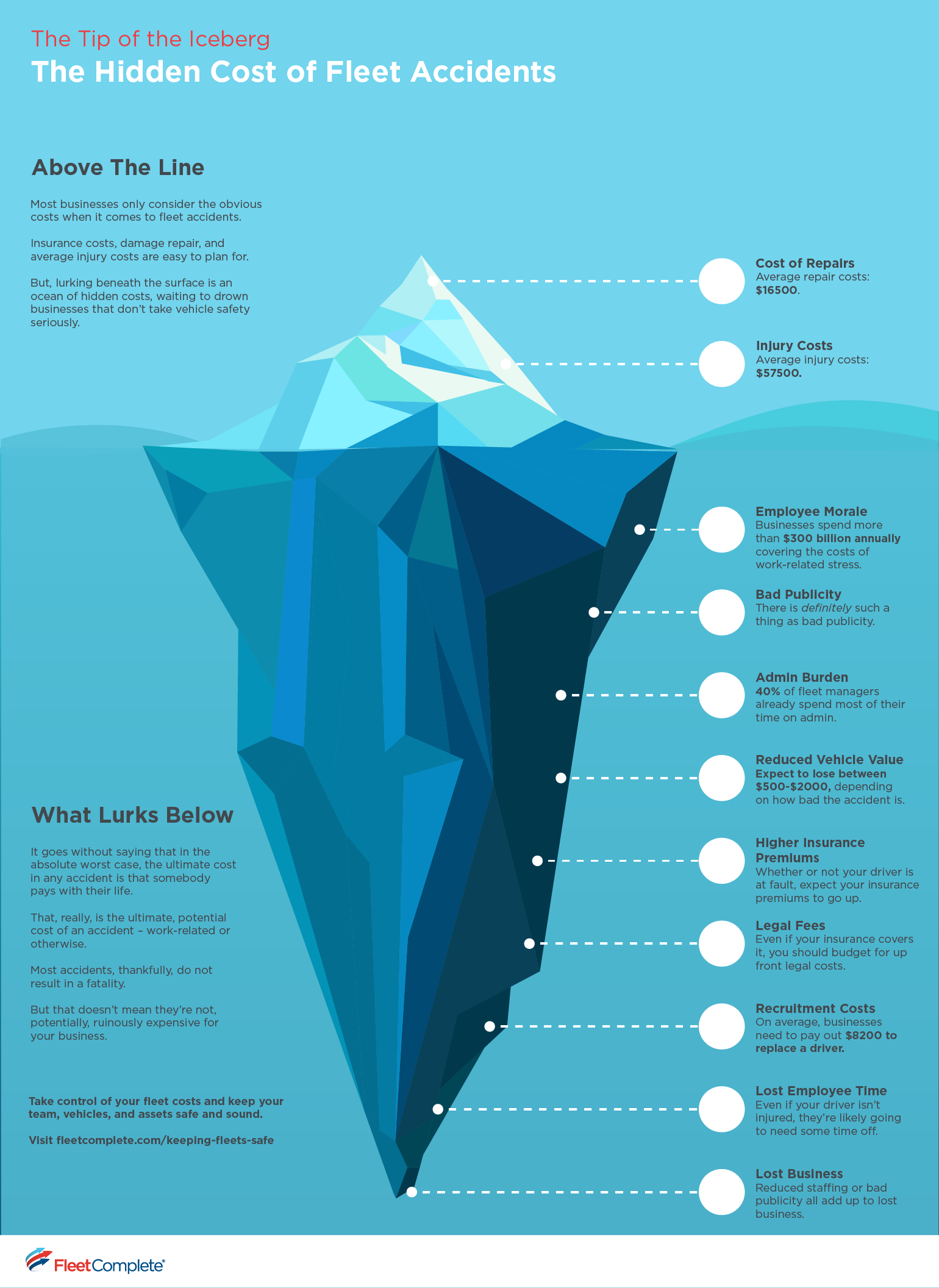 The Hidden Cost of Fleet Accidents

It goes without saying that in the absolute worst case, the ultimate cost in any accident is that somebody pays with their life. That, really, is the ultimate, potential cost of an accident, work-related or otherwise. But most accidents on Australia's roads, thankfully, do not result in a fatality. That doesn’t mean they’re not, potentially, ruinously expensive for your business.

Think of this as an upfront psychological cost, that often ends up becoming a financial cost later.

“You have to offer support following a collision”, says Clare Cain, group insurance/risk manager at Kelly Communications, “not just to improve the driver’s skills, but also to ensure they aren’t suffering from stress or depression”.

It doesn’t matter if it was the driver’s fault, it can still have a profound effect on that person and can also have a knock-on effect throughout your business.

“(A crash) is a traumatic event and it has a traumatic effect on everybody in the company, certainly everybody who is involved directly with that driver”, says Colin Hartley, managing director of risk consultancy Driive.

“When you consider how many people that may be, it can literally run into thousands (of dollars)”, he says.

“There’s no such thing as bad publicity” as the saying goes, but there are plenty of examples of that adage falling apart more than a bit.

Just ask the likes of Uber and BP.

Particularly in this, the era of social media, your logo can end up plastered all over people’s news feeds before you even have a full picture of what’s going on.

This then translates into costs, as your own PR and marketing team (or, if you don’t have one, an agency) gets involved, spending time communicating with customers and the wider public.

Yes, there are many ways technology has reduced the overall burden of fleet administration but still, some 54% of fleet managers keep track of incidents manually.

That’s an awful lot of paperwork.

And bear in mind that 40% of fleet managers already spend most of their time working on admin.

So, fleet accidents pile further admin pressure on fleet managers. And, depending on the severity of the accident, the admin burden can ripple beyond people directly involved in managing drivers.

Regardless of who is at fault, making an insurance claim will almost always lead to an increase in insurance premiums. Depending on where you are in the world, you may have paid extra to protect your no claims discount, but even so the core cost of your insurance premiums is likely to go up as well.

Thankfully, if your driver isn’t at fault, the increase is likely to be marginal next to an at-fault claim.

Then there’s also another cost vector that can come into play: personal premiums.

You see in many countries, if a driver is involved in an accident in a company vehicle, they’re obligated to inform their personal car insurance provider as well. If they don’t, their personal policy could end up being invalidated. Granted, this isn’t a direct cost to your companies bottom line, but it’s something that could impact your team’s morale.

While your insurance policy may cover the bulk (or even all) legal expenses, there are frequently cases where you may need to cover costs up front and then, depending on the outcome of the case, the policy will cover it.

Even if your policy covers legal fees, regardless of fault, your business will likely be on the hook for up front costs, that you can recoup after the case has been resolved. Yes, you’ll be getting that money back in the long term, but you’ll need to have a financial buffer to cover the fees up front.

Whether or not your driver is physically injured, there is likely going to be some time when they’re unable to work.

And, depending on their contract, you’ll likely need to pay them while they’re unable to drive. And, even if you don’t need to pay them, that’s still a hole in your roster that either other drivers will have to cover (leading to reduced team morale), or it goes uncovered and you have to spend time and money finding a temporary replacement.

If one of your drivers ends up having to take some extended time off (and chances are, they will if they’ve picked up an injury, physical or otherwise), then you’ll need to find someone equally capable to cover for them.

Whether you get help from an agency, or recruit a driver yourself, that’s an extra cost you’ll need to cover. In the US the average driver replacement cost comes in at $8,200. That’s based on entry and exit admin, fixed asset costs due to idle equipment, lost profit due to idle equipment, safety training, insurance, and other legal costs.

The “lost business” cost vector can come from many different angles.

It can come from bad publicity; as simple as a shared image on social media or a nationwide news story.

You can lose business because you no longer have the workforce to cover the number of jobs you have on your books. Or it can be as simple as the admin burden being a time vacuum, so you and the rest of your team don’t have the time to focus on actually doing business.

All is not lost, though.