Does more speed actually mean faster travel time? We have some stats that will surprise you.

We all do it. We like to think that we’ll get to our destination faster, if we go above the indicated speed limit. In reality, speeding on most trips will only shave off a couple of minutes at best, while drastically increasing your fuel consumption, risks of a fatal or sever injury from a crash, and air pollution. So is it really worth it?

In-vehicle technology has shown that staying within speed limits does not add to your travel time. In fact, if everyone keeps to the speed limit, it may help with reducing traffic congestion by improving traffic flow – through reductions in speed variation and improved vehicle headway.

Another interesting stat: Speeds just over 5 km/h above the speed limit in urban areas are sufficient to double the risk of a crash. Travel at 20km/h over in a 60km/h zone, and you’re 32 times as likely to have a serious crash.

And in the event of a crash, the severity of your injuries will be directly proportional to the speed you had at the time. The higher the speed, the worse your injury will be upon a sudden impact.

To add to all of the above, think about your insurance rate that will spike, if you’re the at-fault party. You may also get demerit points or lose your licence entirely, as the police traffic enforcement have been reducing tolerance to adverse driving behaviour on a yearly basis.

If you’re driving a company vehicle, being an at-risk driver may reflect on your employment, since the company will bear major costs, especially in litigations.

So, is speeding really worth it? We don’t think so.

Speed kills, which is why Vision Zero across Australia has safe speeds at the core of the road safety problem. It affects both the risk of being involved in a crash and, more importantly, the subsequent outcomes should a crash occur. Research shows speed reduction would be the most successful of all possible initiatives to prevent deaths and serious injuries on our roads. Data-driven plans, in particular on rural roads are being implemented across the country with actions including rumble strips, barriers and telematics utilisation.

If your business or organisation would like to improve your fleet driver behavior to help reduce the risk toll, there are technologies, like Vision by Fleet Complete, that help with live in-cab coaching, while on the road. Vision dashcam detects and records instances of traffic violations, such as speeding, tailgating, rolling stops and lane drifting, and stores short video clips in the Vision app, where you and your drivers can review them after the trip to see what happened and why. 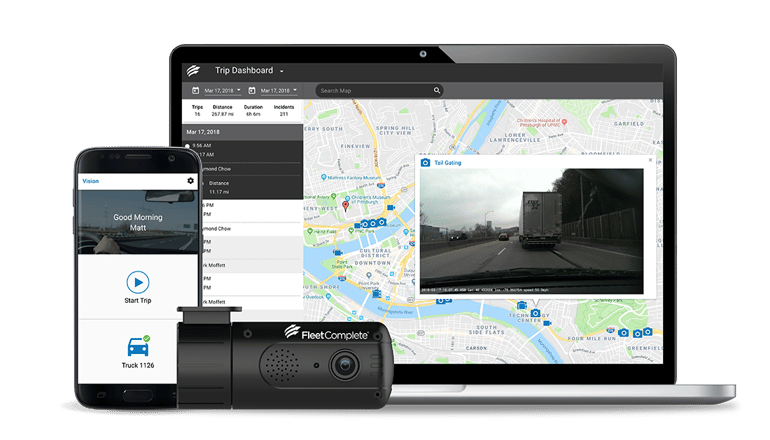 The Vision app, installed on your driver’s mobile phone, is wirelessly connected to the dashcam and will provide voice feedback, as the violations occur throughout the trip. This way, your drivers are more aware of their poor driving patterns and are able to self-correct quicker.

This on-road driver coaching technology can help companies with their driver safety initiatives, and drivers – with their safety scores.