Why is Distracted Driving Such a Big Deal?

How many times have you stopped at an intersection waiting for the light to turn green, when you notice the driver beside you talking or texting on a mobile? The advent of the original distracted driving laws resulted in many drivers simply concealing the device on their lap to avoid detection. The likely result is that the driver, who is not paying attention to the light cycle, will frequently miss or make you miss your turn signal or green light. 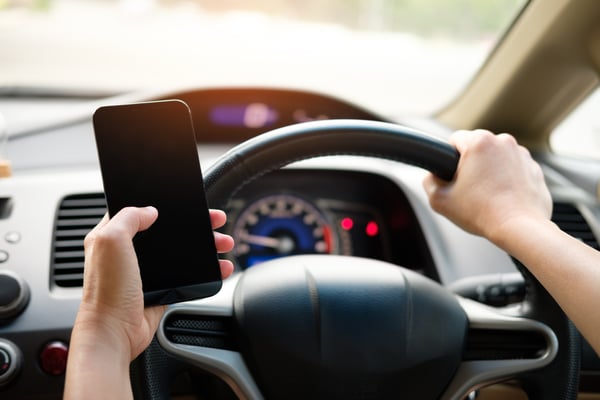 The next predicable action is the motorist(s) behind such drivers will start to honk the horn in a desperate attempt to get you back to reality and to pay attention.

The distracted driver is not paying attention to the actions of other motorists, including pedestrians and cyclists who may also be talking and/or texting while proceeding into a dangerous intersection.

This is a daily recipe for a tragedy, which happens far too frequently!

Using your phone to talk, text, to check map or choose a playlist while you’re behind the wheel all count as distracted driving – and they put you and others that you share the roadway with at risk.

It doesn’t matter if you’re on a highway or stopped at a red light – distracted driving will eventually cost you – it’s just a matter of time!

The easiest way to avoid penalties for distracted driving is to simply not use a hand-held device when you’re behind the wheel.

What exactly is distracted driving?

Well, there are really three main types of distraction:

I call this looking, but not seeing or otherwise known as ‘The Deer in the Headlight Syndrome!'

Distracted driving is any non-driving activity that you engage in while operating a vehicle. Such activities have the potential to distract you from your primary task of driving, which translates into a higher risk of a crash.

Drivers of all ages are using a variety of hand-held devices, such as cell phones, mp3 players, personal digital assistants, and GPS devices, when they are behind the wheel.

Crash statistics have clearly shown that cell phone use while driving, whether it’s a hands-free or hand-held device, will impair your ability to drive safely. You’re more likely to miss key visual and/or audio cues needed to avoid a crash. Hand-held devices may be slightly worse, but hands-free devices are clearly not risk-free.

Mobile phone use whilst driving has been banned in Australia for many years now. In Victoria alone, almost 113,000 fines were issued over a three year period for using a mobile phone while driving. It is clear that the message is not getting through to drivers.

Whilst the law varies slightly in each State and Territory the general rule is that you cannot touch a mobile phone at any time while driving or stopped in traffic, unless it is "secured in a mounting affixed to the vehicle" or "the phone does not require the driver, at any time while using it, to press anything on the body of the phone or to otherwise manipulate any part of the body of the phone".

Demerit point penalties and fines also differ depending on you location:

According to NSW Roads and Maritime Services, using a phone while driving makes you four times more likely to be involved in a collision. You may have seen the latest campaign of Towards Zero - to reach zero deaths and serious injuries on our roads. Road safety is a shared responsibility. Everyone can play an important role in helping reduce road trauma; simply putting your hand-held phone away when driving is something we can all do.